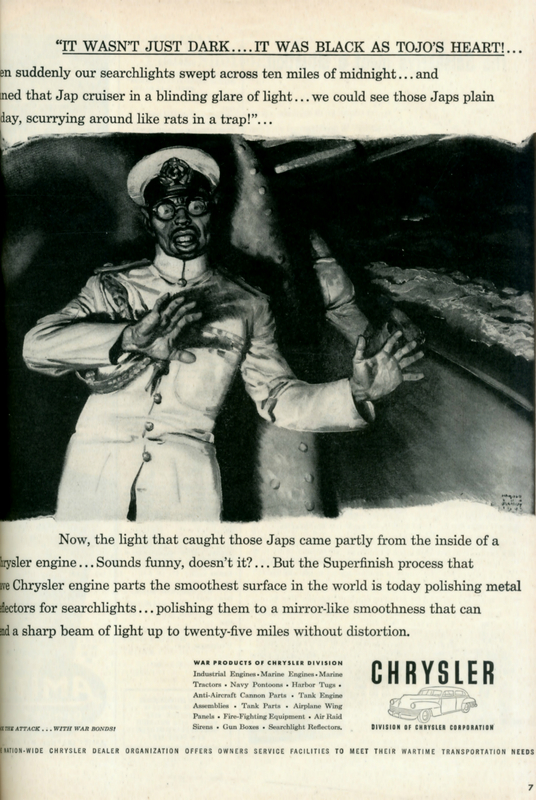 Chrysler Corporation advertisement describing how the polishing process used in its engine parts has been adapted to war-time use in the manufacture of searchlight reflectors. The drawing depicts a caricature of a Japanese naval officer caught in the glare of a U. S. searchlight.

Harold von Schmidt (1893 – 1982) was an American illustrator who specialized in magazine interior illustrations.


Von Schmidt began his art studies at the California School of Arts and Crafts while he was still in high school. In 1924, he entered the Grand Central School of Arts in New York City. He moved to the suburban community of  New Rochelle which was a well-known  artist colony and home to many of the top commercial illustrators of the day such as Frank and J. C. Leyendecker and Norman Rockwell. Also in residence were Al Parker, Mead Schaeffer and Dean Cornwell, who, along with Tom Lovell and  N. C. Wyeth  would become leaders in the field.

Harold von Schmidt's work appeared primarily in Collier's Weekly, Cosmopolitan,  Liberty, The Saturday Evening post, and Sunset. In 1948, he was recruited by Albert Dorne to be one of the founding faculty for the Famous Artist School.
https://en.wikipedia.org/wiki/Harold_von_Schmidt