WOMEN'S ROLE IN THE WAR 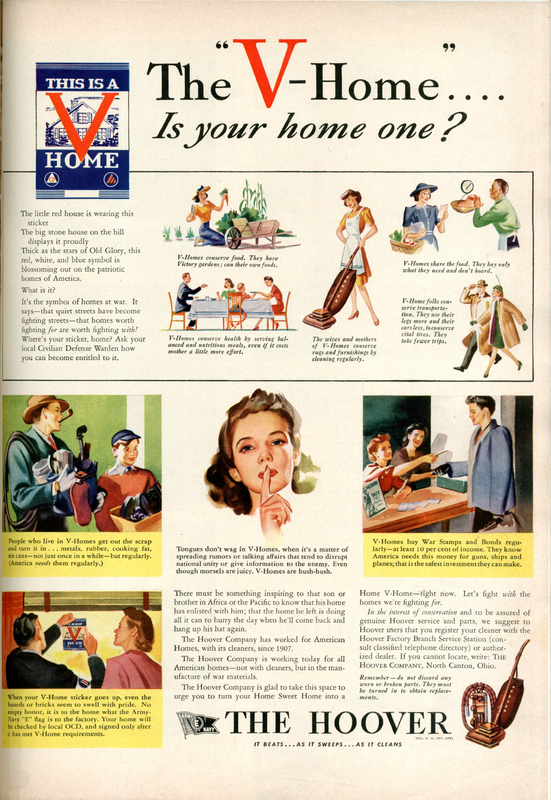 Norman Rockwell's image of "Rosie the Riveter" received mass distribution on the cover of the Saturday Evening Post on Memorial Day, May 29, 1943. Rockwell's illustration features a brawny woman taking her lunch break with a rivet gun on her lap and beneath her penny loafer a copy of Hitler's manifesto, Mein Kampf. Her lunch box reads "Rosie"; viewers quickly recognized this to be "Rosie the Riveter" from a popular song of the day.

The country’s entry into the war in 1941 had a significant impact on the role of women in American society. Women’s participation in the labor force increased substantially as men left to join the armed forces. For many, the image of "Rosie, the Riveter" came to symbolize the wartime experience for women.

According to a 1976 Bureau of Census report, the number of women in the labor force increased by over 20% during the war from 14 million in 1940 to 17 million by the war’s end. (Source: Bureau of the Census, Historical Statistics of the United States (1976) Chapter D, Labor, Series D 29-41)

In their more "traditional" roles as managers of the household, women were urged to practice conservation, raise money, and generally contribute to the morale of the war effort.

Advertisers almost immediately began to feature women in these new roles, urging them to support the war by joining the workplace whenever possible. These advertisements helped foster new cultural attitudes about women's place in American society. Not only were they routinely depicted as part of the workforce, but they were now performing tasks that would be unthinkable only months earlier. 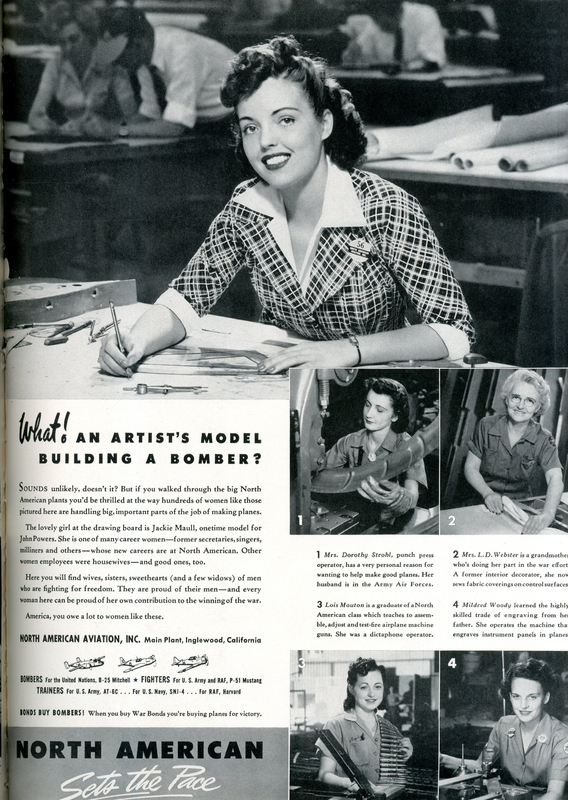 North American Aviation used this ad to showcase the contributions of women from widely disparate backgrounds were making to the war effort at the company. It also served to urge women to support the war effort by joining the labor force whenever possible. It depicted women (including a grandmother) from varying walks of life employed at several different jobs at the company, but it was probably no coincidence that the woman most prominently featured in the advertisement was a former model. The ad sought to remind women and the public in general that serving in crucial defense jobs did not compromise their femininity. 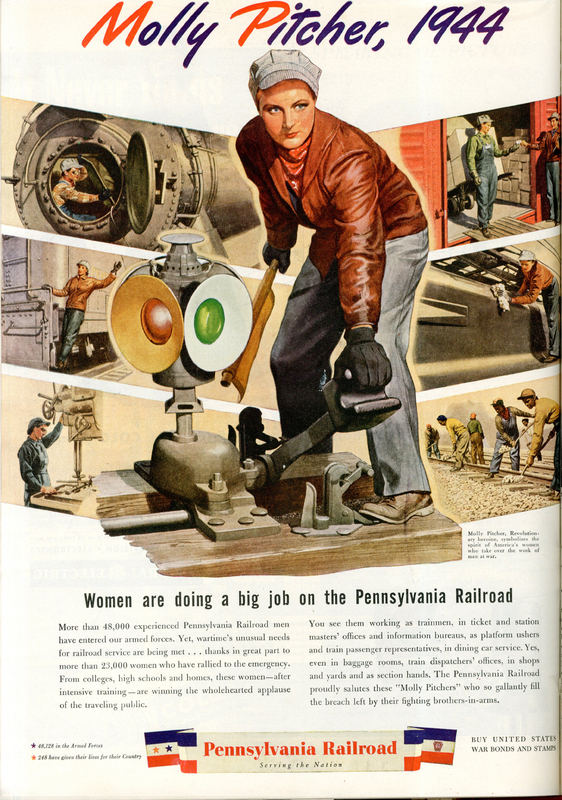 This 1944 advertisement from the Pennsylvania Railroad, reminiscent of the "Rosie, the Riveter" theme, invokes the memory of Revolutionary War legend Molly Pitcher in applauding the contributions of 23,000 women employees in the railroad's system. It depicts the female employees of the railroad performing virtually all of the jobs previously held by men.

Molly Pitcher was a nickname given to a woman (often identified as Mary Ludwig Hayes) said to have fought in the American Revolutionary War battle of Monmouth. According to the diary of Joseph Plumb Martin, who fought in that battle,"A woman whose husband belonged to the artillery and who was then attached to a piece in the engagement, attended with her husband at the piece for the whole time. While in the act of reaching a cartridge and having one of her feet as far before the other as she could step, a cannon shot from the enemy passed directly between her legs without doing any other damage than carrying away all the lower part of her petticoat. Looking at it with apparent unconcern, she observed that it was lucky it did not pass a little higher, for in that case it might have carried away something else, and continued her occupation."

For more information on the historical Molly Pitcher, see: 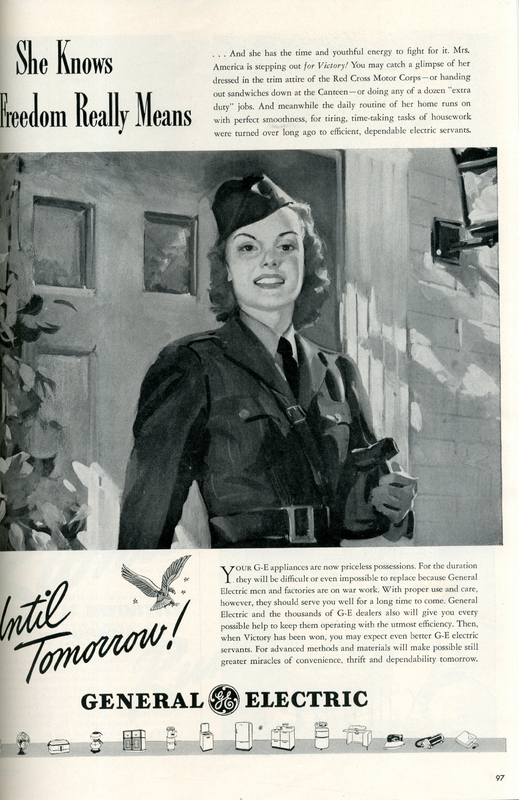 While primarily promoting the company's appliances and promising even better products after the war, this General Electric ad used the image of a young woman serving on the homefront to not so subtly remind the reader that its products allow the housewife the extra time to make her contribution to the war effort. 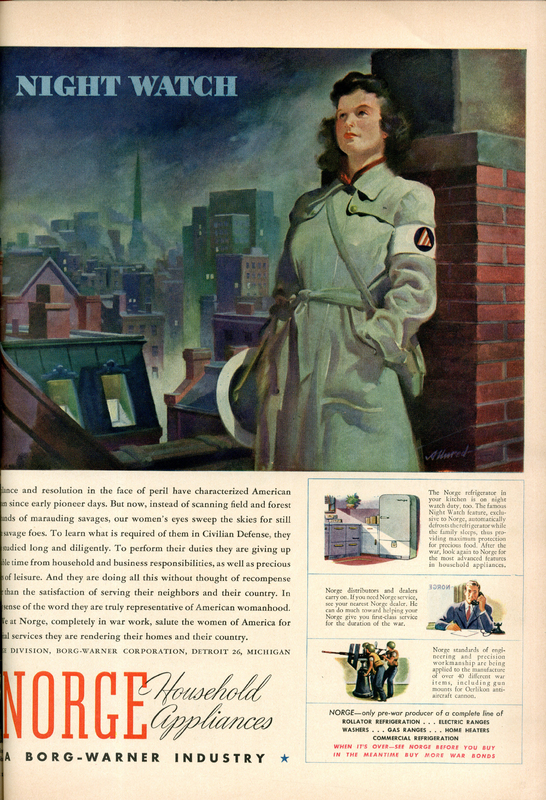 This Norge appliance advertisement uses a romanticized depiction of a civil defense worker standing watch on a rooftop in its salute to women on the homefront while reminding its customers (primarily female homemakers) of its products and promising that its wartime efforts will result in even better appliances after the war. 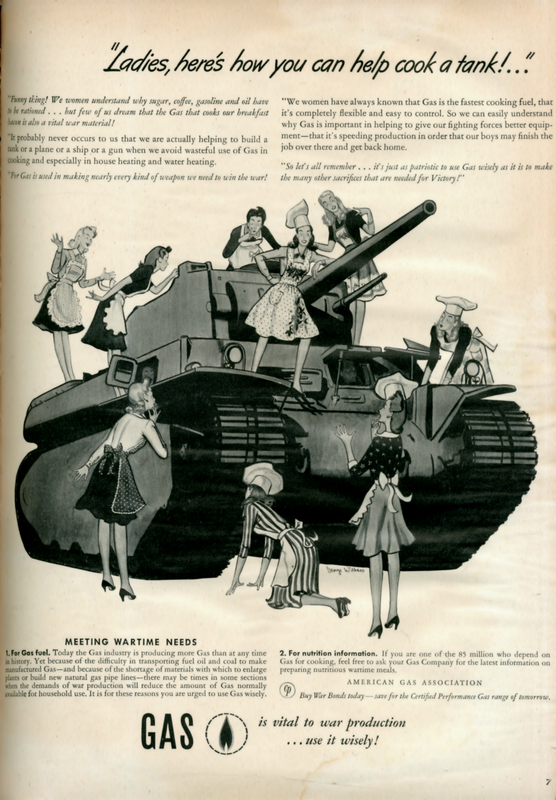 Not every advertisement reflected women's' expanding roles in the war effort. This public service ad from the American Gas Association depicted women as homemakers surprised to learn that the efficient use of natural gas in their homes were a vital contribution towards victory.

George  Withers (1911-1959), the artist who drew this ad, worked as both a commercial artist and an illustrator for several magazines. As a war artist, he served in the United Kingdom and at European  Theater of Operations in Paris under General Eisenhower. His papers are at Old Dominion University in Norfolk, Virginia. For more information, see the "Artists" page in this exhibit. 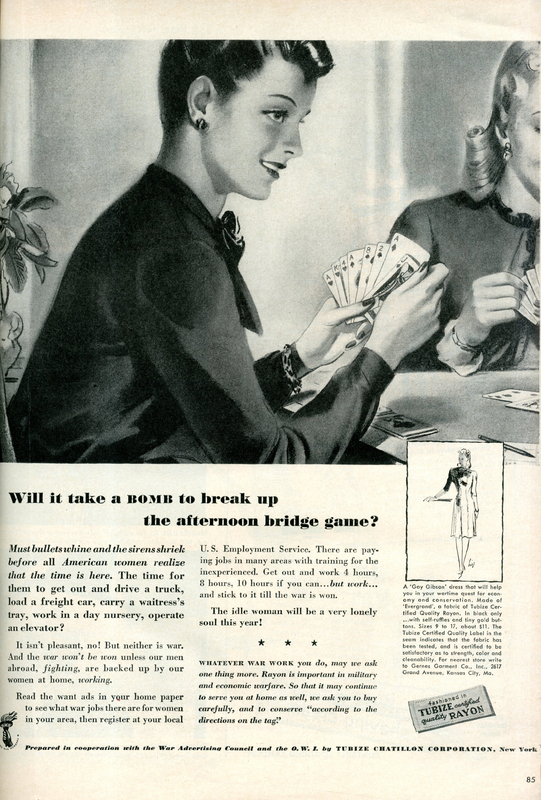 Tubize Chatillon was a manufacturer of artificial silk and related products. This 1943 advertisement, prepared in cooperation with the War Advertising Council, reminded women that nearly two years into the war, it was still vital that women enter the workforce wherever possible. It depicted a seemingly care-free afternoon bridge game and sent a sternly-worded message  that the "war won't be won unless our men abroad, fighting, are backed up by our women at home, working!"