PRODUCING THE WEAPONS OF WAR

While production of most durable goods, like housing and home appliances, was banned for the duration of the war, perhaps nowhere was the shift to a wartime footing more dramatic than in the auto industry. Production of civilian vehicles was totally halted in January 1942 and the industry immediately retooled its factories to manufacture tanks, guns, airplanes, and other war-related products. Automobile manufacturers' advertisements reflected this new reality for the rest of the war.

Aircraft manufacturers, raw material producers, and consumer products manufacturers also shifted production to fight the war, and their ad campaigns constantly reminded consumers of their companies' contributions to the war.

The advertisements shown here are strikingly similar in both content and format. Companies usually described their products in some detail, emphasized their success in achieving or surpassing production goals, and encouraged civilian support of the war, especially through the purchase of war bonds. In most cases, the ads featured stylized visual representations of the equipment in combat situations.

Oldsmobile's May 1942 advertisement described the company's production of shells for the U. S. armed forces. It informed readers that Oldsmobile was producing munitions for the war effort before the United States entered the war in 1941. The ad accomplished this in part by describing Oldsmobile as a leading war production arsenal, perhaps alluding to FDR's  December 1940 "Arsenal of Democracy" radio broadcast, in which he promised to support the United Kingdom against Nazi Germany, without deploying American troops.

Boeing's B-17, was referred to as the "Flying Fortress bomber" in this January, 1943 Studebaker advertisement and claimed that, in collaboration with the Wright Company, Studebaker was producing not just a good airplane engine - but one so great it was unsurpassed, illustrating that the company was still living its motto "give more than you promise." Though Studebaker collaborated with Curtis-Wright, to produce B-17 engines, it was, on its own, a major truck manufacturer for the government during WWII.

Founded in 1852 as a manufacturer of wagons and carriages, Studebaker was an important American automobile manufacturer during the first half of the 20th century. The company's association with the military dates to the Civil War when it manufactured wagons for the U.S. government. Studebaker ceased operations in 1966

The advertisement features a painting of a group of B-17's in flight, by Frederic Tellander, a well-known commercial artist of the period. For more information on Tellander, see the" Artists" page in this exhibit.

This February 1943 Willys-Overland advertisement depicted the use of its "Jeep" vehicle in combat with the Russian army.

The Jeep was developed in response to the army's need for a light cross-country reconnaissance utility vehicle. Three companies (Willys, Ford, and the American Bantam Car Company) produced early models for the government, but Willys-Overland was eventually awarded the contract, due largely to its more powerful "Go Devil" engine. When Willys could not keep up with production demand, Ford was contracted to produce them as well, under license from Willys. During the war, Willys produced 363,000 Jeeps, while Ford produced 280,000. About 51,000 jeeps were exported to the USSR.

James Session, the artist who produced the painting in this ad was a well-known watercolorist and commercial artist whose WWII work is highly prized by collectors of WWII military art. For more information on Sessions, see the "Artists" page in this exhibit.

Nash-Kelvinator Corporation was the result of a merger in 1937 between Nash Motors and Kelvinator Appliance Company.  Nash-Kelvinator ranked 27th among United States corporations in the value of World War II production contracts.

The imagined combat scenario in this ad by an unknown artist depicts the F4U Corsair fighter plane whose engine, designed by Pratt-Whitney, was built entirely by Nash-Kelvinator.

Along the bottom of the ad are also pictograms of plane parts, designed or created by other companies that make up the Nash-Kelvinator built planes, to show that often the work of many companies went into the creation of equipment for the war effort.

The ad goes on to refer to its employees using war-related terminology, so as to compare them to soldiers and also urges Americans to "... keep the battle rolling with War Bonds and scrap material!", furthering the idea that not just companies, but employees, and individuals at home must all do their part in fighting the war.

The Vought F4U Corsair was an American fighter aircraft, that saw service primarily in World War II and the Korean War. Though this 1942 ad boasts that the Navy would soon be acquiring fleets of Corsairs and that the plane was designed as a carrier-based aircraft, originally its difficult carrier landing performance rendered it unsuitable for Navy use. After the carrier landing issues had been remedied by late 1944, it quickly became the most capable carrier-based fighter-bomber of World War II. The Corsair thus came into and retained prominence in its area of greatest deployment: land-based use by the U.S. Marines.

Similar to the analogy of workers in their factories to soldiers in the trenches, this 1942 Nash-Kelvinator Corporation advertisement alluded to its pre-war production activities, making refrigerators, by calling the bombs Nash-Kelvinator was making for the war effort ice cubes. 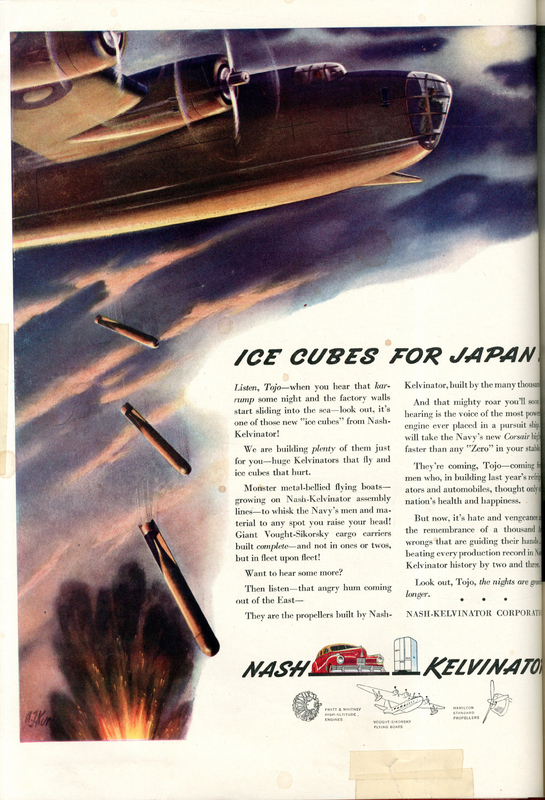 Another common wartime advertising practice that appeared in this ad was to address the narrative of the ad to the Axis powers. This one was directed at the Japanese as personified by its Prime Minister,"Tojo".

Hideki Tojo (1884-1948) was a general in the Imperial Japanese Army and Prime Minister of Japan from October 1941 until July 1944. Tojo issued the final order for the attack on Pearl Harbor. He was executed as a war criminal in 1948. During the war, he became the personification of the "evil" Japanese in WWII propaganda. In this November 1942 advertisement, Lockheed Corporation describes the fleets of warplanes emerging from American factories, specifically the company's P-38 fighter and the Hudson bomber. The color drawing, by an unknown commercial artist, depicts a flight of Hudson bombers from the vantage point of a turret gunner.

The Lockheed Corporation (now Lockheed Martin, a global aerospace company) was a major manufacturer of aircraft during WWII. The company ranked tenth among United States corporations in the value of its wartime production contracts, producing over 19,000 planes during the war, which totaled about six percent of the total war production efforts.

The Lockheed Hudson was an American-built light bomber and coastal reconnaissance aircraft built initially for the Royal Air Force shortly before the outbreak of the war, and primarily operated by the RAF thereafter. The Hudson was the first significant aircraft construction contract for Lockheed—the initial RAF order for 250 Hudsons far surpassed any previous order the company had received. The Lockheed P-38 Lightning was a World War II-era American fighter aircraft. First conceived in 1937 by Lockheed chief engineer Hall L. Hibbard and his then assistant, Clarence Johnson, the twin-boomed P-38 was the most innovative plane of its day, combining speed with unheard-of advances: two supercharged engines and a potent mix of four 50-caliber machine guns and a 20-mm cannon. Upon its official introduction in 1940, the P-38 was capable of climbing to 3,300 feet in a single minute and reaching 400 mph, 100 mph faster than any other fighter in the world. It also doubled as an intimidating long-range threat, capable of carrying a larger payload than early B-17s and boasting a range of 1,150 miles. Over 10,000 P-38's were produced during the war.

This United States Steel Corporation advertisement aimed to surprise the reader, and perhaps also create a feeling of unease, depicts a U.S. marine pointing his rifle directly at the reader. The ad then described new processes by which the company was able to substantially increase the pace of production of materials for the war effort. It also promised that the new technologies in use in their factories would "build a new and greater America in the peace years to come." Ernest Hamlin Baker, the artist who produced the painting in this ad, was a self-taught illustrator, who also painted over 300 Time Magazine covers. For more information on Baker, see the "Artists" page in this exhibit.

This November 1942 ALCOA advertisement promotes the company's production efforts from mining to forging and producing the lightweight metal that went into so many military products during the war. ALCOA Inc., a global leader in the production of aluminum, traces its history to 1886 when an Oberlin student, Charles Martin Hall discovered a way to produce aluminum through electrolysis, drastically reducing its cost.

With the onset of World War II, aluminum became a key strategic metal. Aluminum alloys were specially formulated to be forged into ultra-strong propeller blades, engine parts and structural components for aircraft and military vehicles. During the war, Alcoa ramped up production, building more than 20 smelting and fabricating plants in three years.

This July 1942 advertisement by powerboat manufacturer Chris-Craft, Inc. emphasized the company's war production, and featured the company's "E" award; the awards were presented by the War Department and the "E" stood for excellence. By war's end, only 5% of the more than 85,000 companies active in the U.S. military's war effort had the distinction of an "E" award.

Among the factors considered in selecting recipients were:

Chris-Craft, Inc. is a Florida-based manufacturer of recreational powerboats and was founded in the late 19th century by Christopher Columbus Smith.  In 1941, Chris-Craft started manufacturing patrol boats, rescue vessels, and utility launches for the United States military, producing 12,000 small boats by the end of the War.