ADVERTISING WITH NO PRODUCTS TO SELL

In January, 1942, a month after the United States' entry into the war, President Roosevelt created the War Production Board (WPB) by executive order to direct the conversion of industries from peacetime work to war needs, allocate scarce materials, establish priorities in the distribution of materials and services, and prohibit nonessential production. The WPB rationed such commodities as gasoline, heating oil, metals, rubber, paper, and plastic

In order to convert civilian industry to war production, the WPB assigned priorities and allocated scarce materials such as steel, aluminum, and rubber, prohibited production of non-essential products, including virtually all automobile production, controlled wages and prices, and made patriotic appeals to American citizens to engage in conservation efforts.

The WPB and the nation's factories effected a rapid and large-scale turnaround. Military aircraft production, which totaled 6,000 in 1940, jumped to 85,000 in 1943. Factories that had made silk ribbons produced parachutes; automobile factories built tanks; typewriter companies made machine guns; undergarment manufacturers sewed mosquito netting, and a roller coaster manufacturer switched to the production of bomber repair platforms. The WPB ensured that each factory received the materials it needed to produce the most war goods in the shortest amount of time.

Placing the U. S. economy on a wartime footing meant that companies often had few or no products to sell to consumers. However, corporations, even early in the war, recognized the importance of keeping their names before the public in anticipation of the return to peacetime operations. Additionally, companies wanted to emphasize their involvement in the war as a patriotic, rather than profit-motivated, effort. 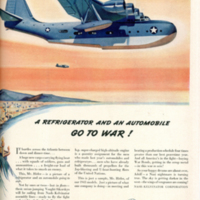 The Nash Kelvinator Corporation, which resulted from a pre-war merger of Nash Motors and the Kelvinator Appliance Company, was a major government contractor during the war. This 1942 advertisement was one of a series of ads that reminded consumers, who no longer had access to its prewar products, of the company's continued operation and new mission, in manufacturing goods for the war.

Both the layout and the message of the ad were representative of many manufacturers' ads. These types of ads visually and/or textually described, usually in detail, the new products they were manufacturing, reminded citizens of the importance of supporting the war effort through conservation, encouraged the purchase of war bonds, and addressed their message to one or more of the axis powers.

This Pontiac ad demonstrated an approach that became increasingly common during the war, in which a company would explain in some detail the new products it was manufacturing and how they contributed to the war effort. In this ad, Pontiac described its success in designing a manufacturing innovation that saved a significant amount of material, in this case, steel, and time in the production of a component of anti-aircraft guns. By tying projects like this to the increased buying power of War Bonds, it also urged civilians to continue their purchase of war bonds.

Note also the pile of scrap metals which resulted in the innovative new part, a subtle nod to one of the many rationing initiatives implemented by the government to secure materials for producing items needed for war.

This December 1942 advertisement by the Waterbury Watch Company reminded consumers that while its production was limited to precision instruments for the war effort, the company looked forward to a peacetime future and the production of watches for a holiday market. Like many ads of the time, it also reminded the public to support the war through the purchase of war bonds. The company had a rich history in producing military products dating back to WWI. French and Swiss designers first developed the wristwatch early in the 20th century. The U. S. Army made it standard equipment during WWI. The Waterbury Clock Company and the Ingersoll Watch Company co-operatively produced watches for the war effort, creating a zinc-radium compound formula that enabled watch hands to illuminate at night. During WWII, the company became the largest producer of fuse timers (pictured above) for precision defense products in the United States.

Many manufacturing companies still sold products during the war, although often in limited quantities. Parker's Pen Company used this 1943 ad to inform readers that their pens were still available for purchase, though not as many due to the rationing of metals. It also points out that

in addition to rationing, the company was supporting the war effort by producing precision military products and writing instruments for the military. It even includes the often employed promise of better products through improved technology when the war was won.

The Florida Citrus commission combined a striking visual element of bomber planes flying over a target at night and a fictional story about fighter pilots preparing for flight in this ad to help sell the unavailability of many of its products to civilians, while encouraging them to purchase, the often more abundant but perhaps less popular products like grapefruit juice, that might be available in stores.

Readers were also encouraged to view the shortage of citrus products as a positive, since the vitamin C contained in them would give American soldiers the strength they needed to win the war. Citrus juices were in short supply for the civilian market during the war, but the Florida Citrus Commission brought Americans on a bomber mission to remind them that "Victory Vitamin C"  was vital to the war effort.