Studebaker advertisement; "Studebaker craftsmen again give "more than they promise".

Studebaker advertisement; "Studebaker craftsmen again give "more than they promise".

Studebaker advertisement describing the company's collaboration with Wright Corporation in the production of B-17 engines. The drawing depicts a squadron of B-17's in flight.

Frederic Tellander (1878-1977) was an important Chicago artist who painted in Paris between the wars and is best known for his triumphant views of both Paris and Chicago. Tellander also worked as a commercial artist and did many notable ads for Studebaker, especially those created during WWII for the B-17 bomber, the "Flying Fortress". He exhibited at the Art Institute of Chicago 93 times between 1910-1941, winning numerous prizes. His work can be found in the collections of the Union League Club of Chicago and the Illinois State Museum. 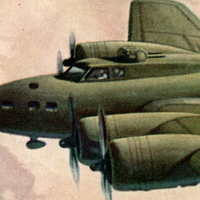 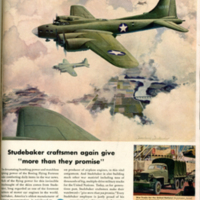 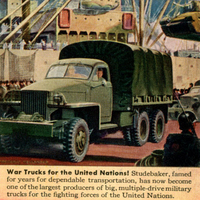