Willys advertisement for the Jeep, engineered by Willys and the U.S. Quartermaster Corp. The Jeep was powered by the Willys designed "Go Devil" engine.

Pg. 13
James Milton Sessions (1882-1962) was an American watercolorist of marine, sporting and military scenes. He also worked as a commercial artist.

Not only do his works document important World War II historical events, they visually portray and convey the spirit of the American fighting forces in both the Pacific and European campaign.The Chicago Tribune newspaper utilized his talents and Sessions is considered to be the greatest "brush reporter" of World War II. His works can be found in Presidential collections, numerous important corporate collections and military establishments throughout the country.

Sessions created numerous wartime advertisements, in addition to the one  here, including another 1943 Willys Jeep ad showing the Coast Guard at Guadalcanall, and a Borg-Warner ad in 1945 showing the mass production of radiators and clutches for motorized warfare manufactured in Detroit. His work is highly prized by collectors of WWII art. 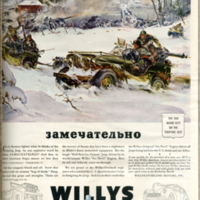 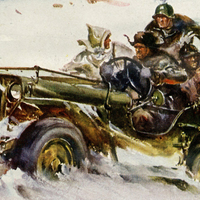