Maintaining civilian morale during the long years of the war was crucial to its successful prosecution. Companies once again tailored their advertisements to send this message. We have already seen how companies explained why civilian products would no longer be available or would be in short supply and how they emphasized the importance of conservation. Many advertisements of the period also tried to define the "American values" the country was fighting to defend and many of the messages were heavy on sentiment and nostalgia. Advertisements of this kind often emphasized the "girl back home" waiting for soldiers to return. 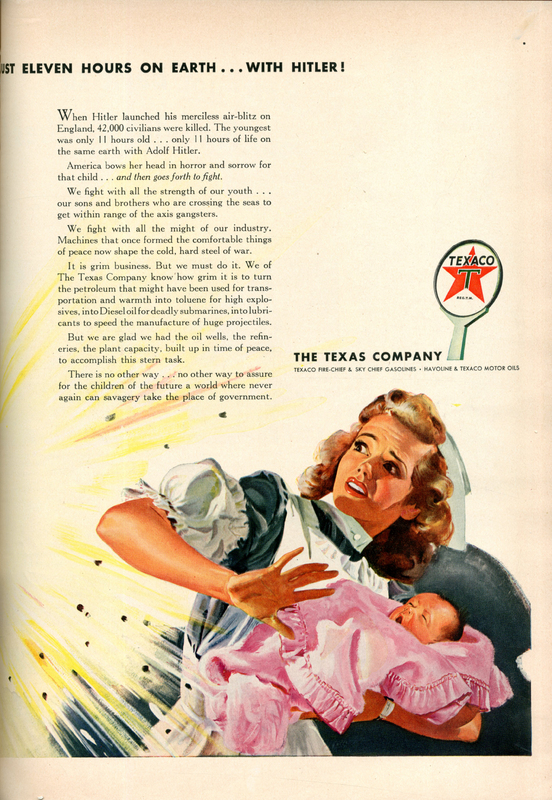 This May 1943 Texaco Company advertisement recalled Hitler's bombing raids on London in which 42,000 people were killed. The picture, produced by an unidentified commercial artist, depicts a nurse (somewhat incongruously attractively made up and coiffed) holding an infant, cowering before an explosion. The text reminds readers of Texaco's redirection of its refining capacities to war products and that we fight  "for a future... where never again can savagery take the place of government." 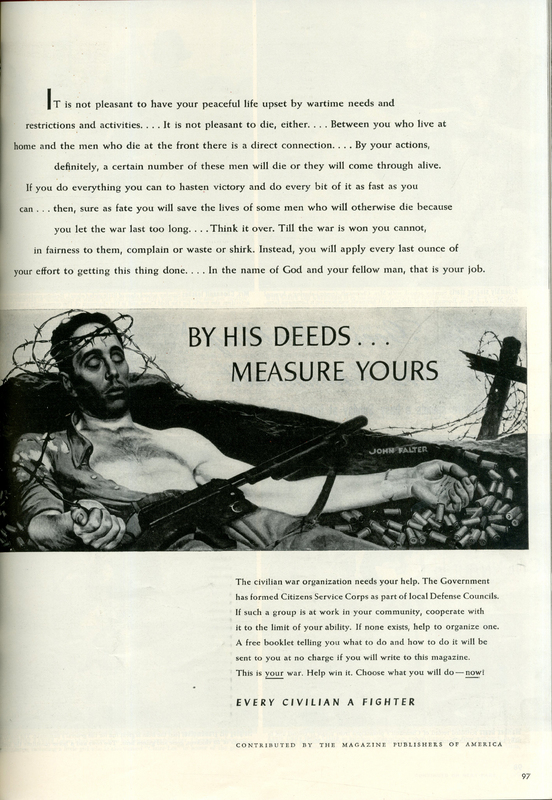 This March 1943 public service advertisement by the Magazine Publishers of America urged total and active support of the war effort by the civilian population by directly tying such efforts to the life and death struggles of the military. The advertisement is striking in its use of religious imagery comparing the soldier's sacrifice to Christ's: it depicts a dead soldier whose head is wrapped in barbed wire, recalling Christ's crown of thorns, and a fence post in the shape of a cross.

John Philip Falter (1910-1982) was an American artist best known for his many cover paintings for The Saturday Evening Post. In 1943, he enlisted in the Navy, where his talents were applied to the American war effort to aid recruiting drives. Falter designed over 300 recruiting posters.

For more information on Falter, see the "Artists" page in this exhibit. 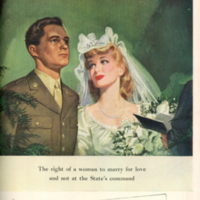 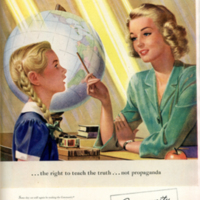 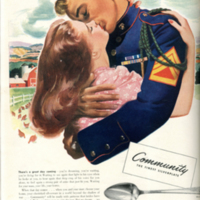 This November 1942 advertisement was one of a series by Oneida Silverware making a patriotic appeal for support of the war by contrasting Americans' freedom to marry for love rather than according to the dictates of the state.

The ad, which depicted an adoring bride gazing at her soldier-groom, was perhaps a veiled allusion to the Nazi anti-miscegenation laws which among other things forbade marriage between persons racially regarded as non-Aryans and Aryans (persons of "German or related blood").

This February 1943 Oneida ad was a very simple and direct message that we were fighting to protect our right to teach truth rather than the enemy's propaganda messages to its citizenry.

The December 1943 Oneida advertisement, "Back Home For Keeps" offered no explicit appeal to patriotism or explanation of the war's purpose, but rather held out the simple promise of reunions when peace returns...and that Oneida will be there with new silverware patterns for new brides.

Alex Ross (1909-1990), the artist whose produced the painting in the wedding ad, was one of the top story and cover artists from the 1940s through the 1960s.  While the artwork in the other two ads is not signed, it is stylistically similar and may also be Ross' work. For more information on Ross, see the "Artists" page in this exhibit. 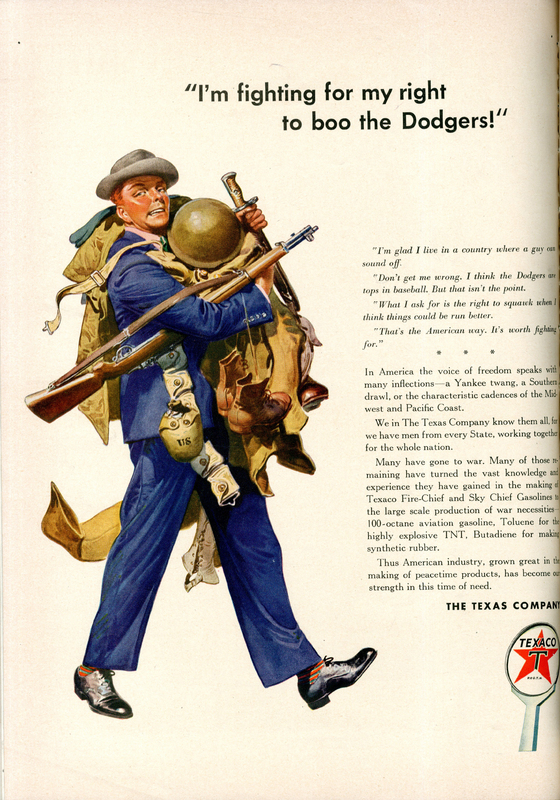 This October 1942 Texaco advertisement offered a more light-hearted explanation of the American values the country was defending in the war against the Axis powers. The drawing, by an unidentified commercial artist, depicts a civilian laden with military clothing and equipment marching off to war to defend his right to "boo the Dodgers" and to "squawk when I think things could be run better" The text of the ad references the Brooklyn Dodgers, who were often used as a symbol of the "Mom, Baseball and Apple Pie" depiction of the American values in the period. The ad's text celebrates the accomplishments of American industry, and specifically Texaco, in providing the materials of war. 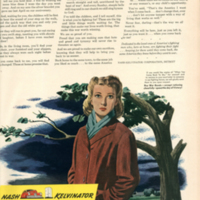 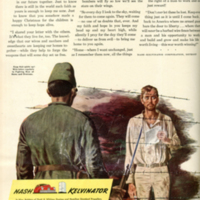 Earlier in the war, the Nash-Kelvinator advertising campaigns focused on the company's manufacturing contributions to the war effort. In 1943, this campaign placed a greater emphasis on morale issues with dramatically illustrated emotional appeals to patriotism, national values, and support of the military. Additional examples of both campaigns can be found in the collections accompanying this exhibit. See the "Additional Resources" page in this exhibit.

This May 1943 advertisement featuring a message from a wife to her absent husband about their life together when he returns from the war. Other than the Nash-Kelvinator logo at the bottom of the drawing, the advertisement makes no mention of the company's war efforts. The advertisement notes that copies were available from the company on request for inclusion "in your next letter to someone in our fighting forces."

Continuing these themes, this June 1943 ad offered a stark depiction of a haggard POW holding a letter behind the barbed wire of a Japanese prisoner of war camp. The message, supposedly in the words of the prisoner to his wife, expresses faith in the continued support of the American homefront, and his belief that the war is being fought to defend American values and way of life.

This 1943 campaign was illustrated by Fred Ludekens,  a well-known illustrator of the era. For more information, see the "Artists" page in this exhibit

← CONSERVATION
DEPICTION OF THE ENEMY →
WHY WE FIGHT