The wartime economy’s ever-increasing demand for materials meant that conservation efforts became a crucial part of Americans’ daily lives. Shortages began to arrive early in the war. Advertisements soon began to emphasize that it was every citizen’s duty to cut back on meat, sugar, canned goods, fuel, clothing, and anything that could be helpful to the war effort. 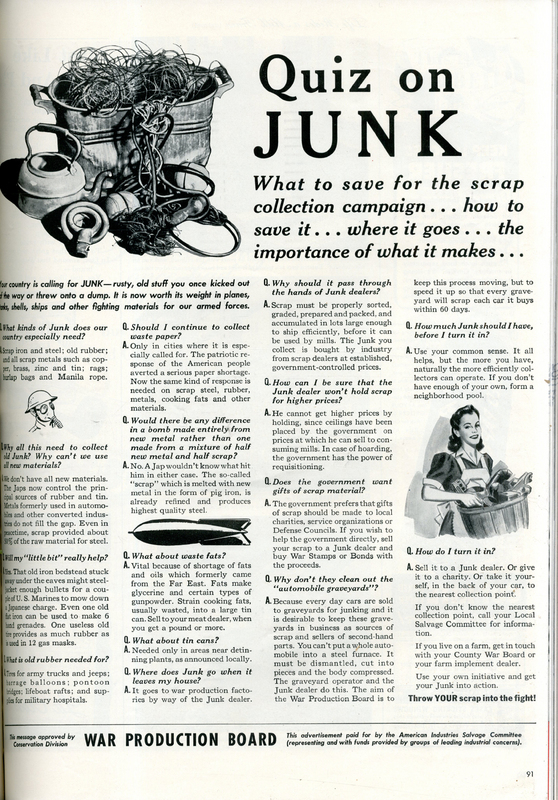 As discussed earlier, the War Production Board (WPB) was an agency of the United States government that supervised war production during World War II.

The WPB's primary task was converting civilian industry to war production. The WPB assigned priorities and allocated scarce materials such as steel, aluminum, and rubber, prohibited nonessential industrial production like nylons and refrigerators, controlled wages and prices, and mobilized the people through patriotic propaganda.

In this public service advertisement, the WPB instructed civilians of the importance of recycling scrap metal and other materials. Note the identification of the Japanese enemy in the text, an effort to personalize a civilian's contribution to the war effort ("That old bedstead...might steel-jacket enough bullets for a couple of U. S. Marines to mow down a Japanese charge.). 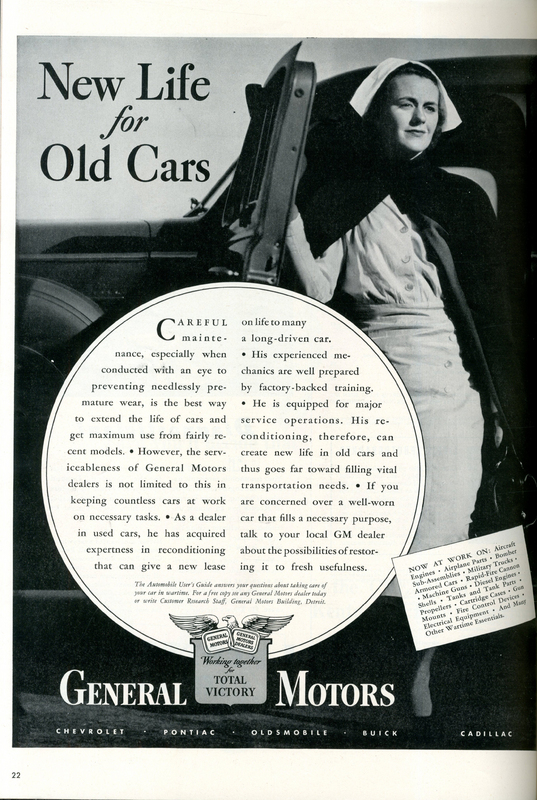 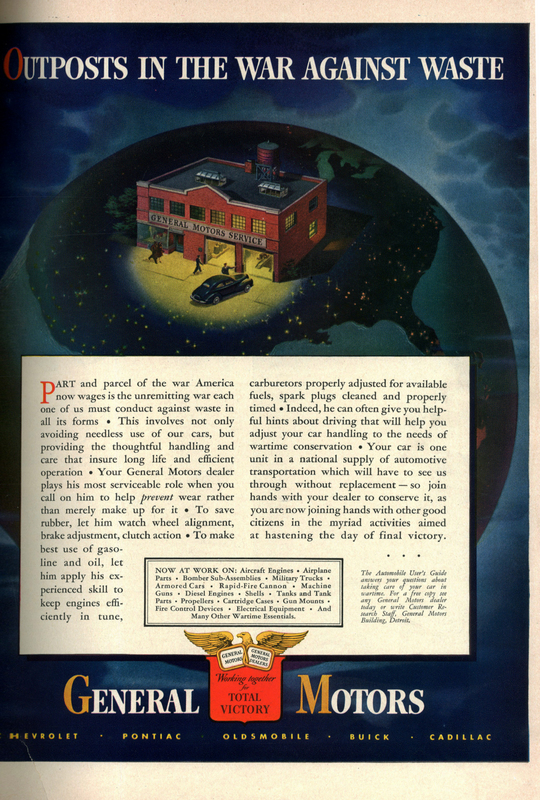 Automobile production was halted in February 1942 and auto manufacturers began the massive retooling efforts needed to convert their factories to full-time war production. No new cars were produced for more than three years and inventories existing when production stopped were only available for purchase by designated "essential drivers", such as physicians. It is estimated that by 1944, only 30,0000 such vehicles remained in inventory.

Since no new cars were available, maintenance of existing vehicles was essential, and manufacturers began to emphasize their dealers' expertise in repair and maintenance activities. This approach also had the additional benefits of protecting individual dealers businesses and keeping the manufacturers' names before the public. These General Motors advertisements, published in the spring of 1942, were typical examples of this new approach to the consumer market. Note the extensive use of text in these advertisements to educate consumers, a feature common to many ads, especially in the early days of the war. 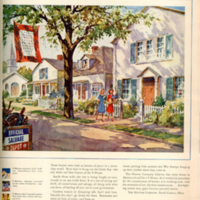 In a series of advertisements, the Hoover Vacuum Company promoted conservation efforts while evoking idealized images of the homefront. This Hoover advertisement highlighted the various small ways that civilians conservation and other efforts could contribute to the shortening the war.

The"Fighting Street" advertisement depicts a quiet neighborhood with small white houses, picket fences, and even a steepled church. Under this peaceful guise, these "V-homes" are fighting the war in many small ways: conserving food and clothing, salvaging essential materials, avoiding rumors and loose talk, and purchasing war bonds.

The company returned to this theme in the "War Shorteners" ad, in which an elevated view of a small town American neighborhood depicts the many ways in which civilians on the homefront can contribute to the early end of the war. The use of a puzzle invites the reader to spend some time reading the ad and to consider some less obvious ways to contribute. 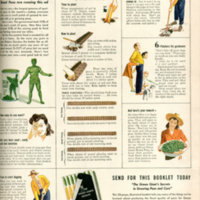 The issue of the availability of food began to emerge early in the war as commercial crops were diverted to military use and food transportation was diverted toward moving troops and war materials.

In January 1942, only two months after the attack on Pearl Harbor, the Emergency Price Control Act granted the Office of Price Administration (OPA) the authority to set price limits and ration food and other commodities in order to discourage hoarding and ensure the equitable distribution of scarce resources. Over the course of about a year, Americans were unable to purchase many foodstuffs without government -issued coupons. The rationed items included sugar, coffee, meat, cheese, fats, canned fish, canned milk and other processed.

The concept of Victory Gardens first arose in the United States during WWI and re-emerged early in WWII as a response to reduced food supplies. Americans were encouraged

by the Department of Agriculture to provide their own fruits and vegetables. They responded by planting nearly 20 million gardens in backyards, empty lots and even on city rooftops. By 1944, Victory Gardens produced nearly 8 million tons or about 40% of the fruits and vegetables consumed in the United States. The Victory Garden campaign served as a successful means of boosting morale, expressing patriotism, safeguarding against food shortages on the home front, and easing the burden on the commercial farmers working to feed troops and civilians overseas.

These two Minnesota Valley Canning Corporation  (later known as the Green Giant Company) advertisements were typical in pointing out the importance of conservation and growing food.

← PRODUCING THE WEAPONS OF WAR
WHY WE FIGHT →
CONSERVATION