The New Deal in Danbury

Throughout the 1930's, Danbury desperately needed to replace the sewer system to accommodate for the rising population and to make repairs. The City did not have the funds to fix their sewer problem, however, the Federal government was able to step in and loan money for the ailing Danbury in return for property for a Federal Institution. This Institution would be a Federal prison, located in the Pembroke District of Danbury. The Sewer lines needed to extend to the prison, therefore aiding the sewer issue in Danbury. In Danbury’s Third Century: From Urban Status to Tri-Centennial, it states that:

In addition, special PWA grants and a Department of Justice loan enabled the city to extend water and sewer lines to the Federal Correctional Institution that opened in 1940. The Danbury News-Times was never in doubt about the significance of this gift from Washington….A succession of New Deal agencies, …CWA for the Civil Works Administration, FERA for the Federal Emergency Relief Administration, and WPA for the Works Progress Administration – provided jobs for thousands of men on a wide range of smaller projects. The Public Works Administration (PWA), under the control of the Interior Department, financed major construction including modernization of Danbury’s antiquated sewer treatment system. In 1938, the eagerly sought building of the Federal Correctional Institution in Danbury brought more jobs to the area. (Danbury's Third, pg. 159)

The Mayor of Danbury, Martin J. Cunningham, would end up negotiating with the Department of Justice (DOJ), primarily claiming “the city was not in a position to arrange for disposals as the present outfall sewer was already too heavily loaded” (Bridgeport Post FCI Clippings [Bridgeport History Center Clippings File]), Wednesday, October 5th, 1938). Danbury would end up receiving a $40,000 loan from the Federal government to make the sewers accessible to the Prison and for the accomodation of its usage.

In the 1935-1936 Resolution from the "Yearbook of the City of Danbury" (shown here) which recorded the unanimous vote to use Federal funds, from the Federal Emergency Administration of Public Works, to aid the financing as well as construction of filters and the extension of Danbury's sewage treatment plant. 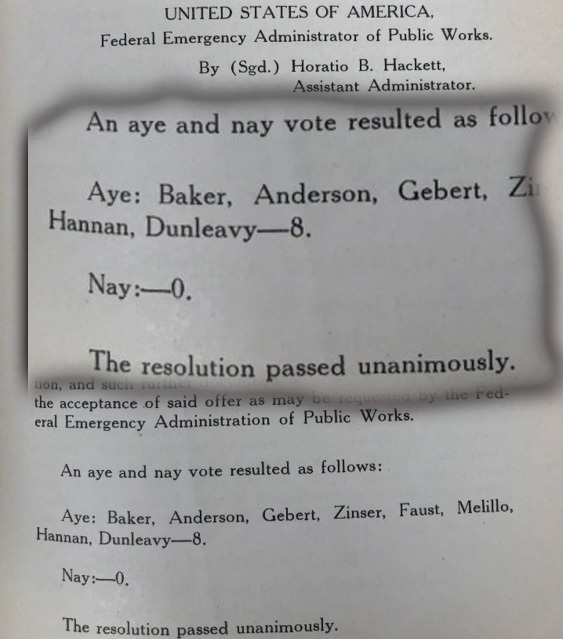 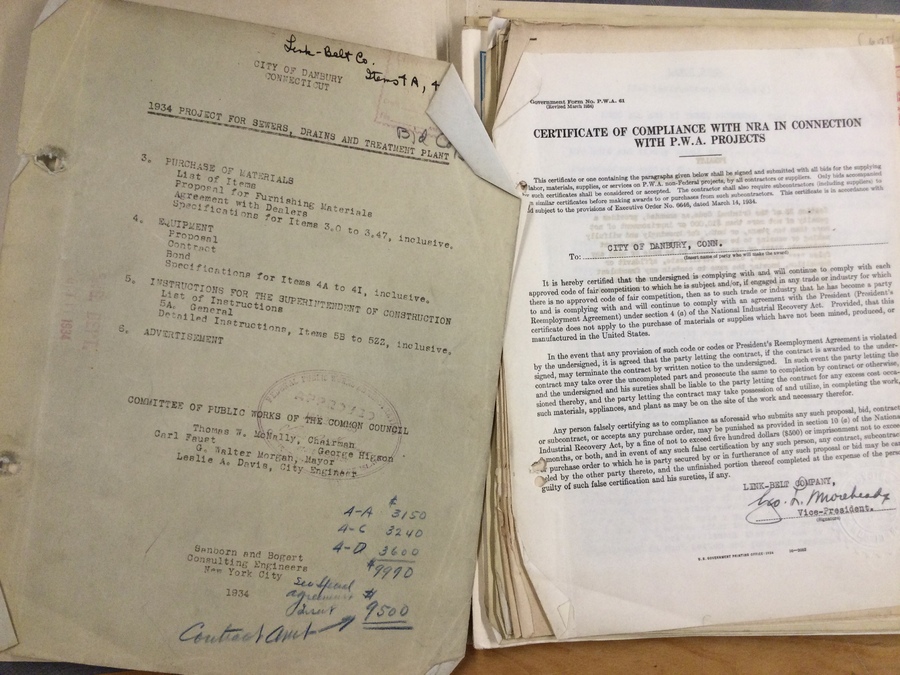 At the WCSU Archives are many of the receipts from contractors and subcontractors (shown piled up here) who were engaged to do the sewer construction in the mid-1930s. There are no equivalent records of expenditures for the F.C.I. construction because it appears all those funds came directly through the Federal Government, making Danbury the indirect recipient of the funding through jobs and tax receipts.