From the Bridgeport Sunday Herald, an artist rendering of the proposed prison. 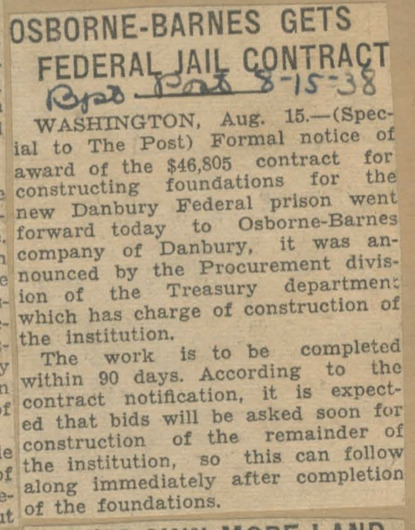 The Federal government gives the Osborne-Barnes company of Danbury the offical contract to build the foundation for the Danbury Federal prison in August of 1938.

On the 14th of August, 1938, prison construction commenced. The $1,750,000 prison, which came from Public Works Administration (PWA) funds, was set to be a minimum security prison that could accommodate 600 inmates and employ 500 workers. The Federal penal institution was initially built on an 150 acre site, largely made up of the farmland from Alfred Ruffles. The Osborne-Barnes Company of Danbury received a Federal jail contract for $48,805 to build the foundations of the Prison in August of 1938. 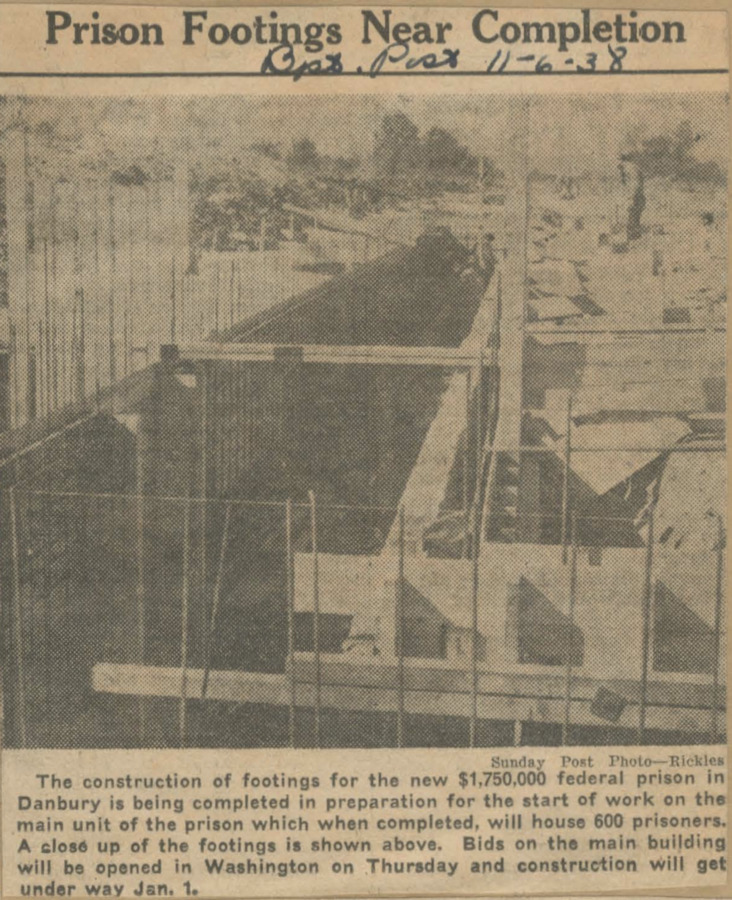 A sewer system was also underway in 1938, which was recorded in the Bridgeport Post on the 5th of October, 1938, which reads:

Construction of an $81,549 outfall sewer line from Cross street to the city disposal plant in the Beaverbrook district will be subsidized by the United States Bureau of Prisons to the extent of $40,000 loan to the City of Danbury, it was revealed by the Mayor Martin J. Cunningham at the October Council meeting last night.

The mayor explained that the Federal bureau, which is constructing a prison in the Pembroke district of the town, is desirous of constructing an eight-inch pipe line along Padanaram street to connect with the city sewage system at north end of North Street here.

The government will pay $720 annually to the city. The mayor said that he told the prison officials that the city was not in a position to arrange for disposals as the present outfall sewer was already too heavily loaded. (Bridgeport Post Clippings [Bridgeport History Center Clippings File], Wednesday, October 5th, 1938)

The Osborne-Barnes contract for the prison footings was estimated to have cost about $90,000. The main part of the prison structure was to cost about $1,000,000 and was contracted to the Edmund J. Rappoli., Co., Inc., of Cambridge, Mass.

The total project was set to finish in 365 days and be able to move prisoners in by the Spring of 1940. In March of 1939, the ground was beginning to thaw creating a large mud issue. The issue was not extreme but did slow the prison’s construction, resulting in the Federal government to think of alternative plans. However, the DOJ just delayed the completion of construction to June 1940. Inspections of the Prison took place in July and the public was allowed to view and tour the institution. The prison was said to house 600 to 700 (reports differ on the actual number) inmates with short term sentences which are no longer than 18 months. The Federal correctional Institution would open officially in August. Each part of the building is named after something or someone influential to the prison, like notable people such as James Bennett, or New England Names. For example, each cell block is named after a city in New England (e.g., “Hartford House and “Boston House”).

This overlay shows how cool everything is