Date:
1614-1992
Abstract:
The Wilton Historical Society Map Collection contains maps and atlases of Wilton and Fairfield County, Connecticut, in addition to local blueprints, plans, charts, and lists of cartographical interest. The collection as a whole provides snapshots of Wilton since the 1700s, mapping Wilton businesses, homes, residents, and place names, showing developments in transportation, environment, and economy, and reflecting continuity and change in local cultures. The oldest dated items are photocopies, tracings, or drawings of originals; the earliest originals are from the mid- to late 1700s. The latest additions are from the end of the twentieth century.
Extent:
44 Linear Feet and 14 map drawers, 14 tubes, 3 boxes
Language:
English .

The Wilton Historical Society Map Collection provides snapshots of Wilton and its environs beginning in the early 1700s. There is a special emphasis throughout on property boundaries and borders with adjacent communities, roads and infrastructure, the locations of homes and names of residents, government and elections, school districts, places of business and industry, and the minutiae of local names and landmarks both permanent (such as Split Rock) and ephemeral (including chestnut stumps and stone piles). Major historical events, in contrast, are less well represented. The collection nevertheless contains important examples, notably a map of General Tryon's Raid during the Revolutionary War and another showing important sites associated with African American history and the Underground Railroad's passage through the area.

The Wilton Historical Society, founded in 1938, collected maps and related items of cartographical interest pertaining to Wilton, Fairfield County, and those portions of New York bordering Wilton. Additions have been made by Carol Russell, Wilton Historical Society Archivist and Wilton Town Historian. The majority of the material included in the collection was created by land surveyors and professional cartographers, with a few items independently produced by local Wiltonians. Local and state governments commissioned the bulk of items in the collection. Some materials were commissioned or amended by local chapters of national organizations, such as the League of Women Voters. A number of items in the collection have been annotated by Wilton historian G. Evans Hubbard.

Arrangement of the collection is by the materials' physical properties, and by their availability for purchase. Individual non-salable items are stored as appropriate in tubes, map drawers, or on shelves. Map copies available for purchase are stored separately in two dedicated map drawers.

LOCATION OF THIS COLLECTION: 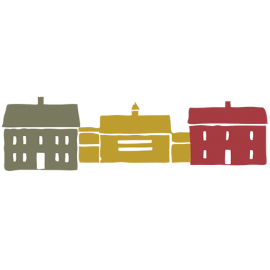